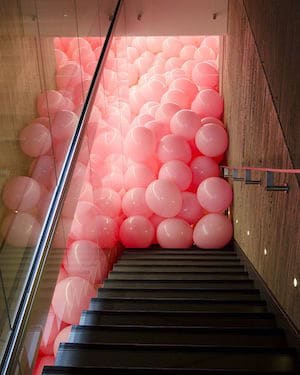 I had a wonderful post ready to post about how much I love helium balloons. before I could finish it I have been told that helium is a finite resource and the party industry is taking helium away from Scientists and MRI machines. I am a fan of Doctors and Scientists as much as balloons so I am content to let them have the helium.

With this in mind I have re crafted this post. Here are some wonderful ways to use Balloons without using helium. Mixed sizes of balloons made into a garland with fresh flowers. These could be helium but tying small bunches of balloons along a cord would give the same effect. The rope of balloons could then be hung anywhere Confetti or glitter filled balloons will still look amazing without the helium. It is the static electricity that keeps the little pieces stuck around the walls of the balloon. These balloons are suspended from the ceiling. I have seen some tutorials that suggest a small weight in each one before blowing them up.